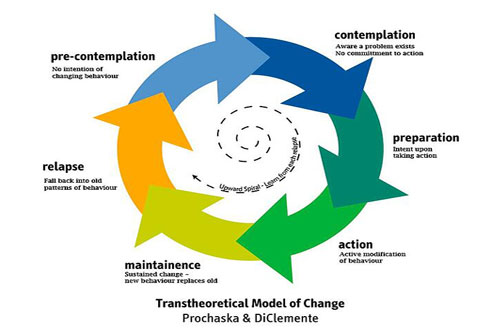 How do People Change?

“I wish I could change but I don’t know where to start!”

How many times have you heard this from yourself or a loved one? Change sounds easy—just stop, do it differently, try another way, etc. They sound like good suggestions but carrying them out is a different issue entirely. Many people really don’t know how to stop because they don’t know another way. Some are deeply in denial and are not truly aware of the depth of the problem. It’s frustrating to those family and friends that want to see their loved one change and live a sober, healthy, functional life.

Change is a process, going though stages from becoming aware of the problem to sobriety. There is a well-known model of change identified by Carlo C. DiClemente and J. O. Prochaska over 30 years ago. The stages are:

Contemplators acknowledge that they have a problem and begin to think about solving it. Contemplators struggle to understand their problems, to see its causes, and wonder about possible solutions. In the contemplation stage, often with the help of a treatment professional, people make a risk-reward analysis. They consider the pros and cons of their behavior, and the pros and cons of change. They think about the previous attempts they have made to stop drinking, and what has caused failure in the past. Many contemplators have indefinite plans to take action within the next few months.

Most people in the preparation stage are planning to take action and are making the final adjustments before they begin to change their behavior. All the weighing of pros and cons, all the risk-reward

analysis, finally tips the balance in favor of change. Not all ambivalence has been resolved, but ambivalence no longer represents an insurmountable barrier to change. Commitment to change without appropriate skills and activities can create a fragile and incomplete action plan. Often with the help of a treatment professional, individuals will make a realistic assessment of the level of difficulty involved in stopping drinking. They will begin to anticipate problems and pitfalls and come up with concrete solutions that will become part of their ongoing treatment plan.

Individuals in this stage of change put their plan into action. Making a public statement or commitment helps to get external confirmation and obtain the supports and external monitors. Individuals in this stage may enter counseling or some form of outpatient treatment, start to attend AA meetings or tell their family members and friends about their decision—or all of the above. The many things that alcohol may have taken from the person begin to be restored, along with hope and self-confidence and continued determination not to drink.

Change requires building a new pattern of behavior over time. The real test of change is long-term sustained change over many years. Because alcoholism is a chronic disease, the possibility of relapse is always present. Individuals may experience a strong temptation to drink and fail to cope with it successfully. Remaining sober is a deliberate act as the person practices the skills that enabled them to make the changes in the action stage. Over time those skills and choices become second-nature to the person but relapse—falling back into old patterns and choices—is always a risk.

Alcoholics who relapse can learn from the relapse. The experience of relapsing and returning to sobriety can strengthen a person’s determination to stay sober only if they examine what lead up to the decision to use or drink again. While relapse can be discouraging, the majority of people who successfully quit do not follow a straight path to a life time free of self-destructive bad habits. Rather, they cycle through the five stages several times before achieving a stable life style change. Consequently, the Stages of Change Model considers relapse to be normal. There is a real risk that people who relapse will experience an immediate sense of failure that can seriously undermine their self-confidence. The important thing is that if they do slip and say, have a cigarette or a drink, they shouldn’t see themselves as having failed. Rather, they should analyze how the slip happened and use it as an opportunity to learn how to cope differently. In fact, relapses can be important opportunities for learning and becoming stronger.

Some people talk about a “termination stage”, the behavior change is completely integrated, and the temptation to revert to the former behavior is entirely gone. This element of behavior change is no longer something you have to “do” — it’s just who you are. You’ve likely become adept enough at the required skills and awareness’s that you’ve learned how to apply them in new ways, perhaps to new goals in other parts of your life. You’re confident enough now in this realm that you may even coach or mentor others in making the changes you’ve mastered.

Signs of Enabling a Loved one Struggling with Addiction

How to Set Goals this New Year in Recovery

How We Can Help